Major economies are embracing the renewable energy development and are making the shift towards more green resources. Here are the key points to bear in mind: 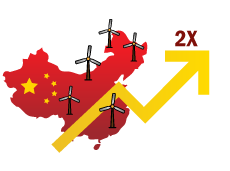 The overall energy consumption in China has doubled over the last decade and will continue to grow very fast in the next few years.

To answer this rising need, China focused on renewable energy production and is:

The leading producer of wind energy, stepping up its production every year.

The largest producer of solar energy reaching the highest growth rate yet in March.

As a result, China has been reducing its dependance on coal: its production has seen a significant decrease these past years.

What about the rest of the world ? Being the top producer, the US biofuel production rate in recent years is a proof of its value in America’s energy sector.

But fossil energy continues to dominate global energy consumptions patterns. Among the largest producers of crude oil such as Saudi Arabia, Russia and the US, production levels remain very high.

Please navigate to Appearance → Widgets in your WordPress dashboard and add some widgets into the Sidebar widget area.